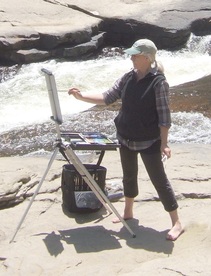 Yelena Snovsky holds Signature Status in the National Oil and Acrylic Painters Society. Her work has been juried into events around the country, including Oil Painters of America (OPA), American Impressionist Society (AIS),  National Oil and Acrylic Painters Society (NOAPS) as well as many National Invitational Plein Air Events, such as "Easels at Fredericks", "Paint Annapolis" and others. Her paintings received numerous awards including second prize at the Salmagundi Club, NYC, "Still Life Honorable Mention" at 28th National Juried Exhibition of Oil  Painters of America. Her art work also was published in the book “ 100 painters of Mid-Atlantic “, in the magazine "American Art Collector", in “2012 Mountain Plein Air calendar” and others.
​Yelena started out her career  as a technical illustrator after graduating university in Belarus with degrees in engineering and graphic art. After moving to U.S. she worked as an advertising illustrator for many years, creating images for various local businesses throughout the New Jersey area. Yelena enjoys painting in oil on canvas. Her art work includes landscapes, seascapes, portraits and still life. Yelena is especially interested in plein air painting and the idea of sharing her instant impression of the moment, in the moment. Most of her landscapes are painted entirely outdoors, in natural light.
​Education

2011 NorthJersey.com Best of the Best are at Regional Jury Art Show February 4
Article